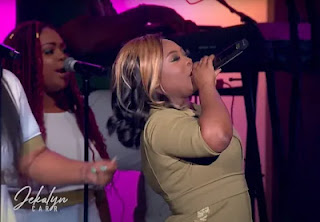 4-time GRAMMY® nominated songwriter and producer Jekalyn Carr, 23, unveiled the encouraging video for her song “Changing Your Story”. The Billboard Top 15 radio hit was recorded live on October 5, 2019, in Atlanta to a sold-out crowd of 17,000 at Cellairis Amphitheatre during Urban One and Atlanta’s Inspiration Praise 102.5 FM “Praise In The Park”. The “Changing Your Story” live music video premiered on Carr’s YouTube/Vevo channel on Monday, June 8, and the digital track along with the bonus track “Power of Love” released Friday, June 5.

Written by Jekalyn and produced and video directed by her father, manager, and 3-time GRAMMY® nominated producer Allen Carr, “Changing Your Story” is a song of hope and encouragement during these tumultuous times that the world is facing with the COVID-19 pandemic, social injustice, defeat, failures, unemployment, divorce, sickness, domestic violence, and poverty.

The Memphis-born singer, songwriter, and producer is a seven-time Billboard #1 chart-topper, four-time GRAMMY® Award nominee, two-time Billboard Music Award nominee, a Dove Award winning, and four-time Stellar Award winner. A lauded published author, film actress, and motivational speaker, she continues to encompass the right kind of substance in which great artists are made. She understands the dynamic and sacrifices she has to make for her platform, and she does them willingly because her focus is on the greater good— impacting people. Her gift, passion, character, integrity, talent, and sacrifice has been evident in everything she does.