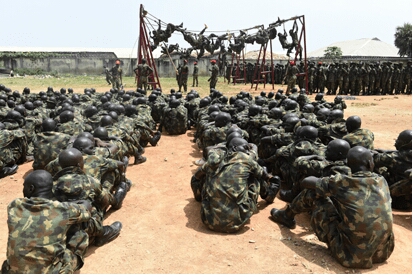 An Economic Community of West Africa States (ECOWAS) Court which sat in Abuja on Thursday June 25, ordered the Nigerian government to pay arrears of salaries and other entitlements to 244 soldiers dismissed from the Nigerian Army in 2016.
The soldiers who dragged the Nigerian government to court after being accused of allegedly abandoning the Boko Haram insurgency fight and fleeing over alleged inadequate provision of arms and ammunition, demanded an enforcement of their fundamental human rights, including the right to their salaries and entitlements.
Premium Times reported that Justice Keikura Bangura who rejected the soldiers’ request to be reinstated into the army, upheld their application that their sack violated their human rights, including right to work and fair hearing.
The ECOWAS court which faulted the decision of the Nigerian Army to dismiss the soldiers on May 15, 2019, ordered the Nigerian government to pay all arrears of monthly allowances and salaries and other entitlements of the affected soldiers up to January 2016.