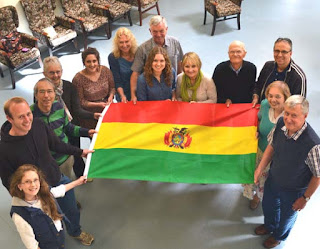 What a Miracle in Bolivia days after Bolivian socialist government made evangelism in the country a crime, evangelical leaders amongst Bolivian Christians led a national day of prayer and fasting in response.
In what is unarguably God’s response to the prayer, the president of Bolivia has gone on national TV to address the situation again.
President Evo Morales Ayma announced that he will tell the South American nation’s Legislative Assembly to repeal the entire penal code in the wake of recent changes that, among other tweaks, introduced severe restrictions on religious freedom.
“We have decided to repeal the Criminal Code to avoid confusion and so the Right stops conspiring and doesn’t have arguments to generate destabilization in the country, with disinformation and lies,” he tweeted. “We are going to listen to the proposals of all the sectors that observe the code. The National Government will never approve norms against the Bolivian people.”
He also went on state television to confirm the announcement, one that fell on the 12th anniversary of his becoming the Andean nation’s first indigenous leader.
“I don’t want to keep using Banzer’s Code,” said Morales, referring to the system put in place by former dictator and president Hugo Banzer. “I ask the assembly … to rapidly advance a new code. I’m almost positive there will be a few changes and modifications to the articles.”
Authorized last month, the amendments to the penal code criminalized evangelism alongside terrorism. Article 88 stated that “whoever recruits, transports, deprives of freedom, or hosts people with the aim of recruiting them to take part in armed conflicts or religious or worship organizations will be penalized 5 to 12 years of imprisonment,” according to a translation by Evangelical Focus, a media initiative of the Spanish Evangelical Alliance.
The amendments to the code had also permitted abortion during the first eight weeks of pregnancy and expanded punishment of “recklessness, negligence, malpractice” in all careers—worrying professionals from doctors to journalists.
Many Christians spoke out about the harmful effects that could come from these changes. Members of FIAJC (the Inter-American Federation of Christian Lawyers) have been visiting Bolivian embassies in a number of Latin American countries, delivering a public notice warning of the religious freedom dangers posed by the new penal code.
Credit: Selahafrik
Note : We have permission to access contents From Selahafrik.